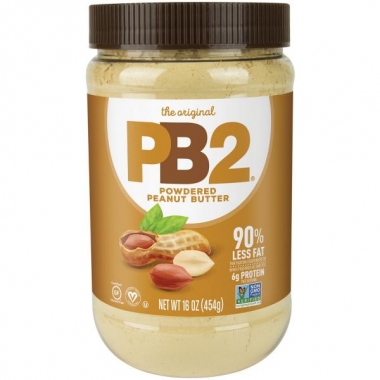 Артикул: 1072 Бренд: PB2 Foods Единица: tk
90% vähem rasva ja üle 70% vähem kaloreid kui traditsioonilises maapähklivõis
6 grammi valku 13-grammise portsjoni kohta
18,90 € 14,18 €
PB2 Powdered Peanut Butter is peanut butter re-imagined! Freshly roasted peanuts are pressed to remove most of the oil. Add a little sugar and a dash of salt for flavor and the result is peanut butter with only 1.5 g of fat per serving - almost 70% fewer calories than traditional peanut butter and 6 g of plant-based protein.
The subject of powdered peanut butter tends to create a lot of questions. One we hear frequently is, Why should I make the switch to powdered? Although PB2 and traditional peanut butter are alike in flavor, there a few things that we think make PB2 the better choice for your busy lifestyle. Here’s our reasoning:

Storage: in a cool, dry place, away from direct sunlight.