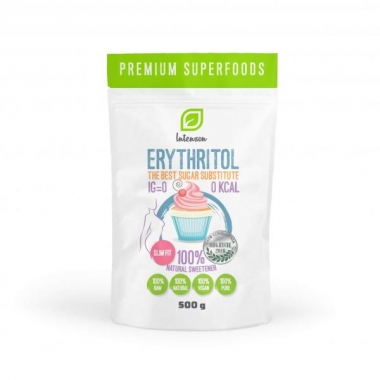 Erythritol is a natural low calorific sweetener. Erythritol has a delicate sweet taste. It is used for baking and cooking, thus reducing the calorie of the dishes prepared. It does not cause tooth decay. After ingestion, it is quickly eliminated from the body. It can be used by diabetics. The advantage of this product is that it consumed even in large quantities there is no laxative effect.

How to use: It can be used for cooking, roasting or sweetening. Keep in mind that it is not as sweet as traditional sugar and reaches about 75% of its sweets.

Erythritol has 0 calories, which is why it is ideal as a replacement for sugar on a ketogenic diet.

Erythritol is a sweetener which is produced in the process of natural fermentation of fruit, which, unlike popular sweeteners, makes it a healthy and safe alternative to sugar.

The greatest advantage of erythritol is its low-calorie.

1 gram of erythritol contains just 0.2 calories (sugar 4 calories, and xylitol 2, 4), preserving as much as 70% of the sweetness that the traditional sugar has.

By treating this completely mathematically-for 6% of calories of sugar we receive as much as 70% of its sweetness.

Low-morality is just one of the many advantages of erythritol. What else does it show about its competitiveness in terms of traditional sugar?

Does not raise blood glucose levels

The human body does not have the enzymes that digests the erythritol. It is absorbed into the bloodstream and then expelled unchanged. This does not increase the blood glucose levels and does not affect insulin secretion. There is also no effect on cholesterol levels or triglycerides. For such properties, it is an excellent alternative to sugar for diabetics, or people struggling with metabolic ailments.

Does not cause caries

The terrestrial bacteria love all kinds of sweetness, as it gives them the necessary energy for reproduction, which consequently leads to caries. However, they are not able to digest the erythritol, so it does not constitute a nutritious medium for harmful bacteria. Some of the studies show a positive effect of erythritol on the condition of the oral cavity, reducing the amount of harmful bacteria.

No irritation of the digestive system

Erythritol is absorbed immediately in the small intestine, therefore it does not irritate the digestive system, nor does it induce diarrher, or indigestion, like other sweeteners. No negative effects were detected in the conducted studies, which means that erythritol is also safe in the long term use.